Evolution and the limits of lifespans

Why does a human live longer than a mouse?

And why does the bowhead whale live longer than a human? And, as recently discovered1, why can the Greenland shark live around 400 years, beating the bowhead whale? The answer, as with most things in biology, is in our genes. Or more precisely, the millions of years of history hidden in our genes: evolution.

What did evolution do?

Let’s look at it like this: imagine you have a basic set of genes, capable of making a simple little organism, which is made up of only one cell. These genes will code just for the things required for the organism to be alive and continue it’s species’ existence. For example, the genes will help it to find food, eat food, and have the little organism make more of itself. It’s a pretty simple genetic ‘to do’ list. This goes on pretty well, but unfortunately this little organism is also mighty tasty, and since its living in an unprotected environment, it happens to get eaten a lot. It almost never lives past about 12 hours before being eaten.

Suddenly, we take this little organism away from the things eating it, moving it to a protected environment. Will it now live on forever? Somehow, we find that these basic genes let the organism keep itself ‘running’ for only about a day now, i.e. 24 hours, after which it dies. It happens to slow down a lot before its death too (i.e. it ages). The reason is not clear. Perhaps, the organism didn’t check the food it found very well, and ate non-edible things sometimes. Perhaps also, while eating food, it made a mess of things and hurt itself. Or, perhaps the reason was that while making a little copy of itself, it didn’t arrange things back in their proper places when it was done, and this started to mess things up. Whatever the cause(s), with the set of genes it has, even if nothing is eating it, things go wrong and it can’t seem to keep itself ‘running’ for more than a day.

What happens if we add in a gene that lets it get rid of the non-edible things it took in by accident? Or what if it learns not to hurt itself while it eats? Or, what if it learns to be tidier while making copies? Well, if it’s still being eaten within 12 hours, these differences really won’t matter. However, if it suddenly stops being eaten as much, these genes might end up being useful. They will end up assuring that it lives longer, and now it might manage to keep itself together and running for about two days instead of one. 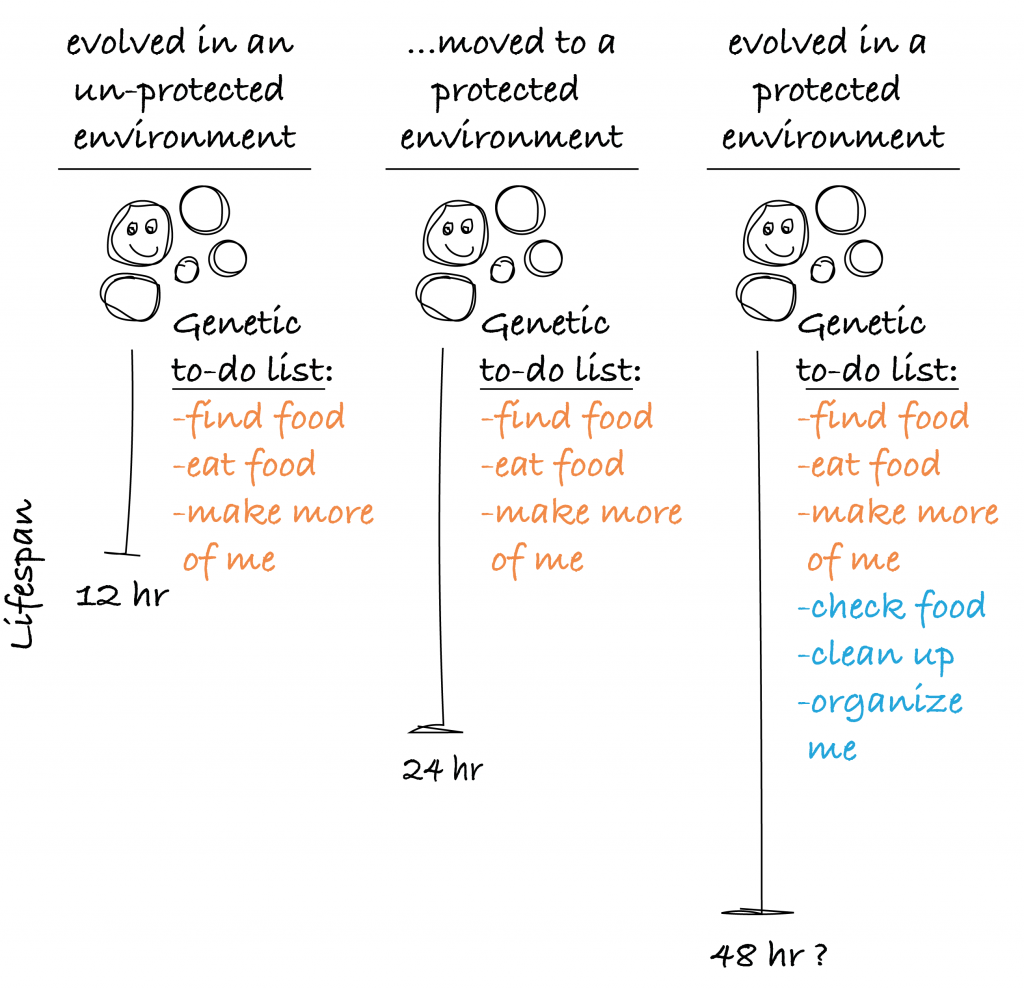 Fast forward to the common ancestor of mice and humans.

Now, if we look at a little furry mammal that was the common ancestor2 of mice and humans, living about a year (let’s guess), we can appreciate that there is already a pretty sophisticated system in place to assure that the organism lives long, if we compare to that single little cell it might have evolved from. The ideas outlined above are the basic principle that resulted in the difference of lifespans between humans and mice. It’s all in the genes we have, and the history they lived through. If it didn’t make sense for evolution to make genetic ‘longevity assurance’ systems, evolution didn’t bother. If somehow it made sense, evolution bothered.

This idea of ‘making sense’ to evolution can come from many different things. A very powerful thing that ‘makes sense’ to evolution is when there are less predators eating you. This is partially why larger animals (which often have less predators) tend to live longer than smaller animals. It is also why, if we compare animals of similar sizes, those that are somehow even more protected (such as turtles with their shells) or somehow more out of reach of predators (such as bats and birds that can stay safe up high) often have longer lifespans too. Another thing that ‘makes sense’ to evolution is how long you should stick around to help your offspring. If the fact that you are around longer, helps your offspring to be around longer and have its own offspring, then evolution likes that, and genetic ‘longevity assurance’ systems start to form. Many different things can ‘make sense’ to evolution, and it completely depends on the context those genes are found in. You just need to be lucky, and hope that your many ancestors have been in a context where it ‘made sense’ to develop more and more sophisticated genetic longevity assurance systems.

Where are we at with humans?

Recently, based on mortality data collected from the past many decades, it was suggested that humans have currently maxed out at around 115 years as their lifespan limit3. At least one human, the French woman Jeanne Calment, was luckier, making it to 122 and earning the title of ‘longest lived human on record’. But is around 115 the best our present genetic ‘longevity assurance’ systems will give us? Maybe so, maybe not, more time (and mortality data) will tell. But the good news is, the mouse, which we could say has a genetic ‘longevity assurance’ system that doesn’t let it live more than about 1460 days (4 years) in the very best case, has presently, with due diligence from science, had the benefit of living up to 1819 days (see the AnAge database4 entry of mouse for references, and enjoy exploring other species entries therein).

With that said, let’s extrapolate how long a human could live if we could transfer the same potential benefit that has already occurred in mice. Keeping it simple, if we assume the lifespan of humans is maximized around 122 thanks to Jeanne Calment, then we could multiply this by a mouse-derived lifespan-extending factor (1819/1460). This math results in a predicted lifespan possibility of about 152 years! The news should make at least one person happy, a scientist currently involved in a bet5 debating whether there are humans alive today that will reach the age of 150. Since the winner of the bet is not expected to be alive to see if they’re right (the winner will be assessed in the year 2150), it could at least be good news for the descendants.