We were lucky enough to get an exclusive interview with the world famous Met Formin, anti-aging expert. Peer inside the head that’s changing the world, and who you just might find sitting in your own house one day. 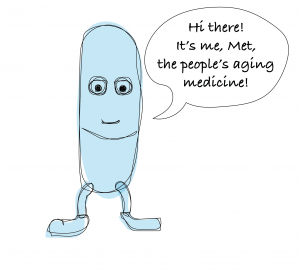 Georges: So Met, your first job was working with diabetics. Tell us how that started.

Met: (Smiles.) Well that was some hundreds of years ago1, you are starting to make me look old now! Back then, I started part-time. I got noticed; my fame spread through Europe, and before I knew it I was officially invited to the US in 1995.

Georges: Now they call you “the people’s aging medicine”. Why is that?

Met: (Laughs.) That’s the first time I hear that. Probably it’s because I’m basically not patented with the Big Pharma. Most people think that medicines that target aging will be expensive, but in fact just a few US dollars per month should cover the costs of my service.

Georges: Would you say you are a competitor to Big Pharma then?

Met: Not necessarily. Let’s put it this way, if Big Pharma earns most of its profits on age-related diseases, then indeed I might jeopardize their business here and there. On the other hand I just might inspire them to develop preventative treatments that target aging itself, in which case they would really appreciate the door I’m opening for them.

Georges: So when would you say your ‘big breakthrough’ for aging stardom happened?

Met: I think it was a lot of little things adding up over the last years. In 20082, 20113, and 20134 people realized that I could extend the lifespan of mice. This and how well I was working to protect diabetics from age-related diseases started to get people curious. That’s probably what led up to the 2015 announcement that I would be part of the FDA approved TAME study (Targeting Aging with Metformin)5. It makes a lot of sense to develop medicines that target aging, so I was just honored that I could serve in the proof-of-concept.

Georges: Some people have suggested that there might be other treatments more interesting to slow aging. For example with Rapamycin6. Why then do you think that you were selected first?

Met: I suppose I just have diabetes itself to thank. If it weren’t for the fact that so many people needed medical attention for this disease, I would never have gotten the opportunity to be so much in the spotlight. It’s a bit strange to thank a disease though…

Georges: A study7 has suggested that even diabetics you work with are likely to live longer than non-diabetics who are on their own, without you. That sounds amazing. In diabetes you work by decreasing glucose production and increasing insulin sensitivity. But that might not be everything for your aging strategy. What’s your secret, how do you work to slow aging?

Met: (Laughs.) If I gave that away, what would I have left?! Some say I decrease chronic inflammation in the body, which is linked to many age-related diseases. Others say I work by affecting how much energy cells think they have, making them believe they are being calorically restricted. That itself increases lifespan you know. Still others say I can remove bad or ‘senescent’ cells from the body. For now it’s my secret, there are theories though5, so pick your favorite!

Georges: Well thanks for your time, any last words of advice for our readers, should they run out to give you a try?

Met: If they are looking for a quick fix alternative to a healthy lifestyle, they can’t use me as an excuse. Let’s wait for the TAME study results5, and then we can start talking about how we can work together… (Smiles.)