Sure, they sound like tests the police might give you to check if you’ve been drinking too much, but these are in fact real ways you can see how well you’re aging, right at home. Why do these correlate so well to survival during aging? Performing these tests requires the heart, lungs, circulatory system, nervous system, and skeletal muscles to work efficiently and together, and therefore reflects the general youthfulness of your body. No wonder one study even found that just knowing your gender, age, and the speed at which you walk, was as accurate at predicting survival as was knowing your gender, age, chronic conditions, smoking history, blood pressure, body mass index, and hospitalization histories1. That’s impressive. So here are the tests, give them a try:

This one is a walk in the park. Walk in a strait line, with a known distance of somewhere between 4-10 meters. Time yourself. Determine your walking speed (divide your walking time by the distance walked). Rule of thumb: if your speed is above 1 meter per second (about 100 times faster than a garden snail), you are doing great1.

This one sounds the most like an alcohol test. Close your eyes and bend your knee to lift one foot off the ground. How long can you balance? Rule of thumb: make it to 30 seconds and you are a top performer. You can go back into the pub you were just pulled out of, and/or go on living a long healthy life. Actually it’s no joke. One study found that scoring less than 20 seconds (with eyes open though) was associated to having ‘silent’ strokes (lacunar infarctions), something which often precedes actual strokes, and dementia2.

This is the most well characterized estimate of how you’re physically aging, but it might in fact be the hardest to do at home. You need a hand grip strength tester. I don’t have one. If you have one, squeeze it. Hand grip strength steadily increases throughout youth, peaking somewhere between age 29-39 in men (with a median of 51kg worth of squeeze-power) and 26-42 in women (squeezing a median of 31kg worth). It undergoes a minimal decline thereafter, with a much more obvious decline starting around age 60. While the optimal-health values will be different at each age, let’s put it this way: at the age of 80, half of men squeeze less than 32kg worth, and half of women squeeze less than 19kg worth3.

Like all the tests here, there are a variety of ways to do this one too. One way is by sitting in a chair and counting how many times you can stand up (with locked knees) and sit back down, in 30 seconds. This is probably the easiest for you to do right now, since you are reading this and most likely seated. Try it, now. Unlike the hand grip strength test, this one is mainly informative at ages above 60. If you are younger than that though try it anyways and you should aim for getting at least 14 chair rises if you are a man, and 12 if you are a woman in those 30 seconds. Here is a breakdown of what that the Center for Disease Control in the US (CDC) recommends getting at each age group: 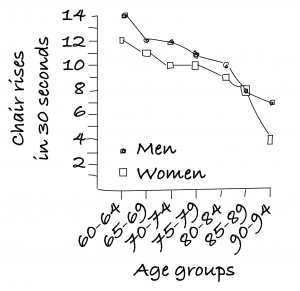 Break time. That’s not one of the tests, let’s just take a break to catch our breaths, the chair rise test is a tough one, I know, I just did it. In the meantime, I’ll mention that the above four tests have been academically validated many times over. And even when combining individual studies together for each test (in what’s called a meta-analysis) these four tests have been robustly showing up as good predictors of mortality in the elderly, across the board4. Meanwhile, the fifth test below is newer to the field, but has taken center stage, becoming somewhat of a media hype (as seen here and here) since it’s publication debut5.

You start from a standing position, with your legs crossed, awarding yourself 10 points. Sit down to the floor without using your hands, and stand back up. Every time you used a hand, a knee, touched your thigh, i.e. just otherwise needed to stabilize yourself to get back up, you subtract a point. Getting above a 6 means you are doing ok. Sounds easy but try it, you’ll see why scoring a 10 is exceptional…

Yes, the dance test. Dancing incorporates all of the above physical activity tests, and cognition too. It can be done both at home or socially. Ok, there is no official dance-aging test yet, but there should be. I just made it up. And there maybe should also be an alcohol test version of it.  In any case, a start at making it an aging test would be to ask this question: are you dancing at least 1-2 times a week? If so, you are doing great (as published). Those dancing more while aging seem to do better than those who aren’t. That means this test also counts as an effective intervention, where there is evidence that dancing might end up giving you better balance6, flexibility7, stable walking8, and cognitive performance9 than your aging non-dancing peers10. You might even have more than a stable walk, and have a ‘cool’ walk.

Extrapolating now, a dance-aging test might even be able to say in what decade of life you are, serving as a crude ‘age predictor’. For example, are you staring at your feet while dancing? Then you are probably in your teens. Are you dancing like the picture above? You might be in your 50s. As can be seen, there would be many benefits from further developing and refining a dance-aging test. In any case, for more on how dance is beneficial into old age, you might want to take a look at this pdf from the Centre for Policy on Ageing in the UK. Or dance, and see.