How a Snicker’s bar is healthy

Inside all of us, there is an enormous, passionate, slightly obese, Raccoon. Though quite sociable, Raccoon unfortunately has one main drive in life: Snicker’s bars. It is often going full-throttle on it. Obviously, the more Raccoon gets satisfied, the less you have of a healthy life expectancy. What you might not realize though, is that Raccoon’s passion is made up of only three things: proteins, fats, and carbohydrates. In fact, all your food is mainly made of these. Raccoon doesn’t care about those measly little micronutrients, the vitamins and minerals, and right now, nor should you. This is about the big stuff, the so-called macronutrients that have an enormous effect on your life. 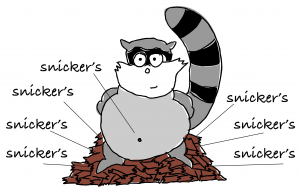 Many diets play around with the composition of these macronutrients and you might have heard of the high protein fad diets, such as Atkins. These high protein diets may be popular in Hollywood, but not with Raccoon. That would be like a Snicker’s bar with mainly peanuts, no caramel, no nougat, no chocolate… a nice snack but a terrible Snicker’s bar. So you can’t blame Raccoon. And doctors don’t blame Raccoon either: the American heart association has placed a warning against having high protein diets, due to possible risks for cardiac, renal, bone, and liver abnormalities1. So far, that leaves a happy Raccoon with a full Snicker’s bar.

So, it’s definitely not high protein, but what is the best food composition to have? It turns out the longest-lived cultures around the world have diets that are high in carbohydrates, over 65%. Fat amounts are somewhere in between, and protein is very low… so we will say that sticking to that ratio is not a bad idea! (The ‘Western diet’, generally considered unhealthy, is around 50% carbohydrate, 35% fat, and 15% protein). Health experts agree too (here and here) with the ‘longevity’ ratio. So do mice; a study looking at various diet compositions found that a ratio as low as 1:13 of carbohydrate to protein was most beneficial to a long life2.

And Raccoon likes it too: This ratio of ‘higher carb’ –‘medium fat’ – ‘lower protein’… also happens to be… exactly what a snickers bar is composed of! (62g carbs, 24g fats, 8g protein). So thats how a Snicker’s bar is healthy. Raccoon had it right. Trust the animal instinct. But is a Snicker’s bar really healthy? …Now we make Raccoon unhappy. Food is not just about the ratio of these macromolecules, it’s about what these are actually consisting of. Below is the breakdown of the healthy versions of foods from each category. With this, we can try to make Raccoon happy again by building the ‘Happy Raccoon’ bar.

So, too much can be a bad thing. Indeed, in the field of aging, we know that having lots of protein activates pro-aging pathways3, and high-protein diets, before the age of 65, are associated to higher cancer incidence and shorter lifespans4. Of interest though, higher protein might start to get important after the age of 65, when we would want to avoid losing too much muscle mass4.

Where to source your protein? Many studies have been finding that red meat in particular seems to be problematic5. In a study looking at over 120,000 men and women for over 20 years, it was estimated that 7-9% of deaths could have been prevented if red meat consumption had been reduced by half a serving (~ 42 g) per day6. These were deaths often due to cardiovascular disease and cancer6. So… the recommendation is there: eat less red meat5.

So far, Raccoon is still happy.

Here is where Raccoon starts to get unhappy. Because we have to let Raccoon know about a particular fat in Snicker’s bars: the partially-hydrogenated soybean oil. No good. It’s thrown in there to give the Snicker’s a longer shelf life – at the cost of your life. It’s not just in Snicker’s, it’s in most processed foods. And just having a 2% increase in trans fat in your diet is associated with a 23% increase in chance of heart disease10,11. Wide-eyed Raccoon. That is crazy.

So there is a lot of talk about ‘good fats’ vs. ‘bad fats’. General guidelines can be summed up from the results of another study looking at the same population of over 120,000 men and women 12. In this study, the types of fats found primarily in packaged/pre-made foods like doughnuts, cookies, crackers, muffins, pies, cakes, snicker’s bars etc (termed ‘trans-saturated’ fat) had the highest association to mortality. Those were the ones that made Raccoon wide-eyed. Next in line for increased mortality was the types of fats found from animal sources, such as in cream, butter, cheese, red meat, etc (termed ‘saturated fat’). So those are better to minimize too. Consumption of several fat types though was also associated to decreased morality. These included fats from many plant sources, and deep sea fish (termed ‘polyunsaturated fat’ or PUFA, and ‘monounsaturated fat’, or MUFA). Those ones will make Raccoon happy, and here are some of their sources:

With Raccoon looking gloomily at the magazine stand, it seems that carbs have all been lumped into a ‘bad’ group. And there are lots of carbs in a Snicker’s bar. But just like protein and fat, the trick lies in what types of carbs to eat. No surprise, it essentially involves eating the less processed, less refined, more ‘complex’ ones. So avoid that ‘corn syrup’ related stuff that is often in manufactured foods (and in Snicker’s). The best examples for carbohydrates in the diet are whole grains, fruits, vegetables, and legumes. Raccoon is now listening, because Snicker’s doesn’t have that.

Every serving (28 grams per day) of whole grain was found to be associated with a 5% lower mortality, including cardiovascular related deaths13. Fruits and vegetable consumption, around 5 servings a day, is associated to lower mortality too14. Even better, a study looking at diets of people aged 70+ in four countries; Japan, Sweden, Greece and Australia, found that legume consumption had the highest association to longer life, compared to all other foods15.

So what would the bar look like that would make Raccoon happiest? Lets design it. 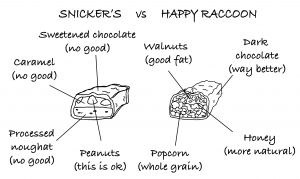 Something with good fats, good carbs, low protein, may look like this. Let’s throw in a popcorn compressed center (i.e. whole grain carbs), maybe with a little honey (make it tasty and kick up the carb ratio) covered by crushed walnuts (i.e. the good fats and plant protein) enrobed in dark chocolate (i.e. without refined sugars used to make milk chocolate). Badaboom, the happy Raccoon bar! 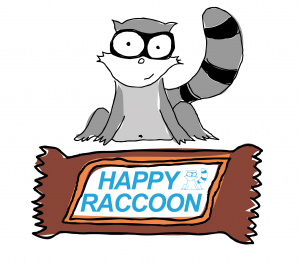