The what, why and how of aging

What is aging, why does it happen, and how? Good questions.

Here it’s pretty well accepted, aging makes you more likely to die, and you are going to die of a disease. That simple. (Assuming you are lucky enough to not die from an accident or the violence of this world). You might want to read more about the top causes of death and what we should do about it. The next question starts to get a bit trickier now:

Why does aging happen?

This is basically asking ‘why does aging even exist’?! Well, why should we not age? The answers to ‘why’ questions in biology usually root themselves in evolutionary theories. For example, why don’t penguins fly? Or Ostriches? This might be because something else was more important for evolution than to have them fly, such as swimming better or running faster. For aging, something like this might be the case too. Why do we not live forever? Presumably, something else has been more important. For this answer, you’ll want to read more about the evolution of lifespans and watch a video on the differences between lifespans in mammals. And for the question that might have got you to this page:

You might have heard of some of these statements: “we age because of damage to our DNA”, or “we age because of ‘free radicals’, dangerous byproducts of metabolism, that damage our cells“, or “we age because the ends of our chromosomes, the telomeres, shorten with each cell division and eventually get too short, looking like damage to the cell”. Which one is right? The truth is, there are counter examples for all of these theories 1–4, and there is no consensus among scientists.

What you might have noticed is that the word ‘damage’ ends up in a lot of these theories. This is likely because we have thought of the body as being a machine, and we see the machines we have built around us fail because of an accumulation of wear-and-tear damage. So it is certainly intuitive… but the difference we need to remember is that we are not simply ‘machines’ that are ‘built’ into life. No, we are biological, and are ‘grown’ into life! So could it be that aging is caused by something different entirely? Well, there is an exciting and new theory taking shape…

The scientific community is starting to warm up to the idea that aging is not (only) caused by damage, but is (also) caused by ‘growth’. More formally this is a theory called “hyperfunction,” defined as a “purposeless continued activity of developmental programs in later life”5,6. In simple terms, that means that the things that let us grow, from a single cell, to a fetus, to a baby, child, and adult, continue on in unintended ways, destroying our bodies and taking shape as ‘aging’. So the body can age by itself, without damage being a direct necessity. Quite a paradigm shift in thinking! Side note needed: I am a bit biased towards this particular theory, having published research supporting the idea 7,8.

In any case, for every theory there is a counterexample, and the truth is that probably all of the explanations above of ‘what causes aging’ are correct, to varying degrees depending on the species, the tissue and cell types within the organism, and the environment the organism is in.

The take home message: Those are the questions to keep in mind for the bigger picture of ‘aging’. If you are out and about, and hear people mention various ‘theories’ on aging, try to put them in perspective of these three questions (something like the drawing below), which one do they most address? In order to get to a long and healthy life though some practical advice is going to be more useful for now… 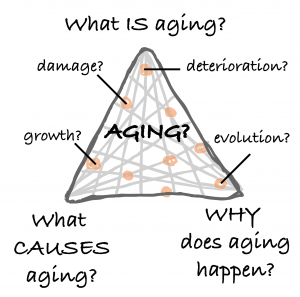